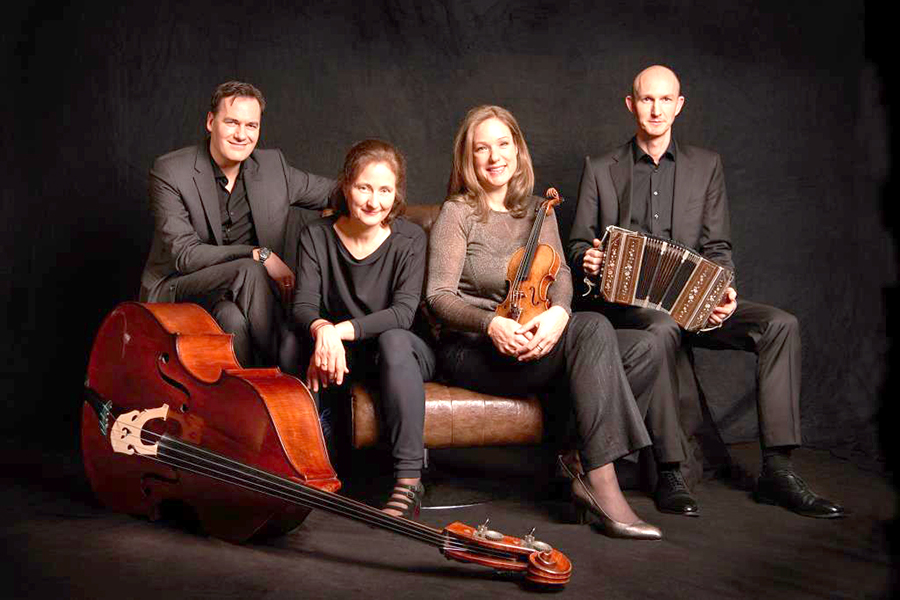 Isabelle van Keulen Ensemble,  “Music, as there is no tomorrow” (NDR Kultur radio)

The Isabelle van Keulen Ensemble was initiated in 2011 by the internationally well established violinist and violist Isabelle van Keulen, following her Carte Blanche concert series in the Concertgebouw Haarlem, the Netherlands, with the purpose to perform Astor Piazzolla’s Tango Nuevo master works to the highest technical and musical standards.
Together with bandoneonist Christian Gerber, he himself one of the leading performers of his generation, and winner of several prizes, a.o. the Deutsche Schallplattenpreis, pianist Ulrike Payer, well known for her versatility and sensibility in all musical genres and double bass player Rüdiger Ludwig, a charismatic musician and Co-Principal of the NDR Orchestra Hanover, they overwhelmed their audience on their first appearance.
The result was a series of high profile concerts: Concertgebouw Amsterdam, Rheingau Music Festival, Schlesweg Holstein Festival, Delft Festival a.o., reinvitations followed immediately
In 2013 their first CD and DVD „Tango!”  appeared on Challenge Classics with well known works by Astor Piazzolla, which was highly praised in the international press and received several awards at Dutch and German radio stations: CD of the week with f.e. Hessische Rundfunk Frankfurt and Norddeutsche Rundfunk.
Together with the DVD production Challenge brought out a documentary about the making of the CD (‚Music from the Heart’). The production of the second CD "Grand Tango" followed spring 2015, the third "Angeles y diablos" in 2018.
Over the past years the Isabelle van Keulen Ensemble toured entirely europe, with concerts at all mayor festivals and famous concert venues like the Elbphilharmonie Hamburg in November 2019.
In their concerts the Isabelle van Keulen ensemble inspires their audience with the highest level of perfection and musical intensity and transmits the poignant beauty, strength and melancholy Piazzolla’s music in a direct and gripping way.

Listen to the latest album

Listen to some tracks